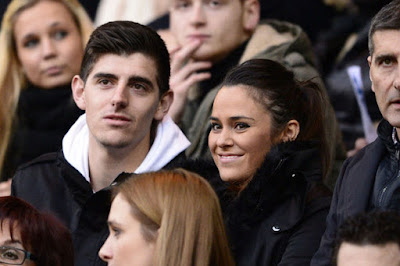 Chelsea goalkeeper, Thibaut Courtois, has confirmed that he has dumped his pregnant girlfriend, Marta Dominguez.


Courtois and 24-year-old Spaniard have been together for a number of years, having met when he was on loan at Atletico Madrid. The couple have one child together and are expecting another.

In a statement, the Chelsea keeper confirmed they parted ways in September last year.

It reads: “Mijn girlfriend Marta and I are no longer together. Since the beginning of September, we have decided to end our relationship, on amicable terms.

“We both went our own way, even though she was already expecting our second child. She moved to Madrid, I stayed in London.

“We still love each other and we get along very well, but we don’t have a romantic relationship anymore.

“But we don’t run away for our responsibilities. We are first and foremost parents of a beautiful princess, Adriana, and our about to be born son, Nicolas.

“We’ll strive to give our children the love and attention they deserve. Marta and I will be still present in each other’s lives, as good friends and the best parents for our two kids.

“Their luck is our priority. In the meantime we’re looking forward to the birth of our second child.”

Courtois will be in action when the league leaders welcome Manchester City on Wednesday.
at 3:18 PM