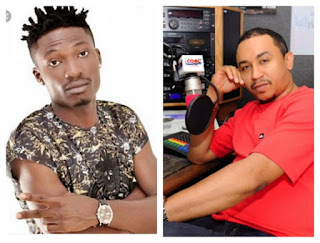 Media personality, Freeze has written an epistle in which he reacted to Efe winning the 2017 edition of Big Brother Naija. He says Nigerians should not attribute Efe's win to prayers rather they should see it that he won because of his charisma, great personality and popularity.

A spectacular win attributed to Efe's charisma, great personality and popularity. This should not be attributed to prayers. Why call Gods name in prayer for a show where his name is considered a swear word? Or don't you know that the word 'God' is beeped just the same way 'f..ck' is beeped? God is almighty and all sovereign, but when the Bible said let's give unto Caesar what is Caesar's this was what JESUS was talking about. Let's take time out to ponder upon what is a genuine human effort, and what is from God so we won't be slaves to nations like China, the U.K., Canada, France and Italy which are the least religious countries in the world, yet are far more developed than we are. A clear biblical example is the case of Pharaoh who worshiped the sun god, yet God revealed himself through a dream to him because Jacob, who was both alive and well while this was going on, blessed and strong in the prayer department, was yet found wanting in physical works, allowing God to give the glory of his revelation to a pagan Pharaoh. Genesis 41:28 KJV[28] This is the thing which I have spoken unto Pharaoh: What God is about to do he sheweth unto Pharaoh. Notice that despite this revelation from God, Pharaoh still worshiped the sun God and gave Joseph the daughter of the sun god as a wife. Genesis 41:45 KJV[45] And Pharaoh called Joseph's name Zaphnath-paaneah; and he gave him to wife Asenath the daughter of Poti-pherah priest of On. And Joseph went out over all the land of Egypt. The problem of seeking only prayers and blessings, is that we become slaves to those who choose to act just like the case of the Israelites in Egypt clearly illustrates. ~FRZ Let's remember that prayer is in the revelation equation not in the success equation. ~Bishop Tudor Bismark.#FreeTheSheeple