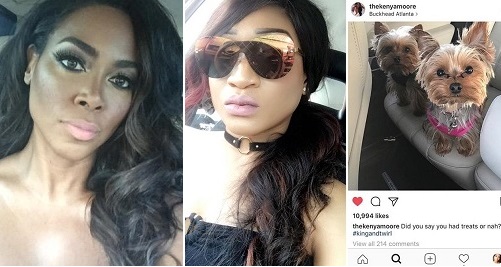 Kenya Moore in a chat with Jules Uncut has finally reacted to Oge Okoye’s dog theft allegations: “Who does that?”

Recall in March, Nollywood Actress, Oge Okoye was called out for stealing photos of Kenya Moore’s dogs by one of the latter’s Fan page. The actress claimed the dogs were hers and even went as far as naming the dogs Rob and Rosy.

“Yipee, my new babies just arrived. #Rob#Rosy,” the actress wrote on Instagram.
After reports went viral, she was of course dragged to filth by Nigerians to the extent that she had to disable Instagram comments.

In this new interview, the American Actress expressed her surprised at the picture theft,
“I did see it.” adding that “Someone sent me the screenshot and I thought ‘who does that?’ Why would anybody want fake dogs that are not theirs?”
She continued, “I don’t know the actress who did it, so I can’t speak to that – on who she is as a person. But I thought, ‘is this a joke’, and if it is not a joke – why?”
Kenya Moore showed her good heart as she stated that she is ready to help Oge Okoye to get similar breed of dogs if she can afford it.
“I can definitely provide references for a good breeder should she choose to actually buy a dog,” Moore said, adding, “I got them from a wonderful breeder and they were not cheap. If she has the coins, I can give her reference.” 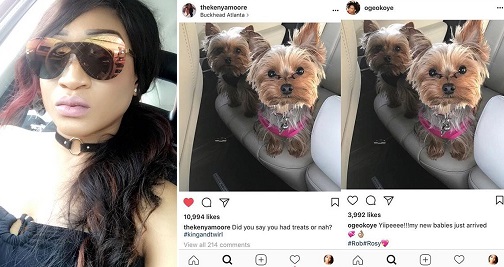 “I met D’banj when I came to co-host a concert with him. I’ve been friends with him ever since. He’s a great guy. He’s like my little brother. I love him to death. And I love his music and I always just root for him. He’s always been the nicest guy to me,” she said.
at 3:15 PM