Today, a Federal High Court sitting in Port Harcourt, Rivers State, would rule on the bail application of controversial journalist, Kemi Olunloyo. She was arrested by security operatives and charged to court for publishing materials that were allegedly offensive to a frontline Port Harcourt-based cleric, Pastor David Ibiyeomie. 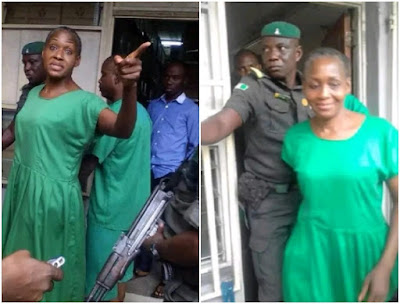 The journalist had earlier been arraigned at a magistrate’s court before the matter was transferred to the Federal High Court.

Her bail had been opposed by the prosecution counsel, David Abuo who told the court that in spite of her being remanded in prison, Olunloyo had been issuing threats through her Instagram page over her continued detention.

But her counsel, F.O Lawal insisted that Abuo’s argument in opposing Olunloyo’s bail fell under extraneous matters that were targeted at prejudicing the court.


The trial judge, Justice H.I.O. Shamah, however, fixed Tuesday, April 11 (today) for ruling on the bail application and continuation of hearing on the case.
at 10:14 AM