Buhari Signs Not Too Young To Run Bill 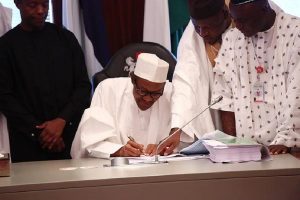 President Buhari signing the Not Too Young To Run Bill

The passing of the ‘NOT TOO YOUNG TO RUN BILL’ has initiated a war of words.

The members of PDP have insisted that the globally applauded campaign was their invention.

However, the bill was the brainchild of Tony Nwulu in the House of Representatives and Abdulaziz Nyako in the Senatorial position.

Although Mr. Nwulu is a member of the PDP, Mr. Nyako is officially an APC senator from Adamawa.

The notion of the ‘not too young to run bill’ is to create an enabling environment for youths participation in elections and governance. The vision is that ‘whoever can vote can be voted for’, and the concept of age discrimination should be kicked against. It can be deduced that the restriction on political participation is a caricature to the concept of democracy.

This is not just a Nigerian problem, but one that has puzzled 83% of the countries in the world.
This is the much-awaited opportunity for Nigerian youth to put a voice to their claims about the failures of the older generation on the subject of governance.
The new law reduces the eligible age for those seeking to be members of the state Houses of Assembly and House of Representatives from 30 to 25 years, and those aspiring to be President from 40 to 35 years.

The vote of confidence by president Buhari is highly commendable and should be emulated, in his exact words, he says “I am confident each one of you will transform Nigeria in your own way – whether through the media, agricultural enterprise, as economists, engineers, or as lawmakers in your states or at the federal level, or as state governors – and even someday, as President. Why not? He also retrieved his initial statements made at the Commonwealth forum, where he described Nigerian youths as needing almost everything despite Nigeria’s young democracy.

Despite being accused on several fronts, the signing of the bill places Nigerian youths on a pedestal. President Buhari acknowledged the feat achieved by Nigerian youths in the area of Agriculture, Business, Media, Art and other relevant platforms.

Even as Nigerian youth begin to celebrate, the issue that would plague us from here is  “are we not too young to run ?”. This stems from the fact that an average Nigerian 35-year-old might not be mentally and financially ready to occupy such a delicate position.

However, this is a step in the right direction for Nigeria’s 58-year-old democracy. The onus is however on us, to fit into these big shoes. To do this, we must do the needful by getting by PVC.