CUPP: A Merger for Nigeria's Future? 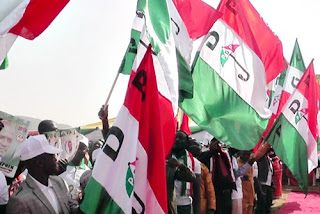 The People’s Democratic Party, PDP, on Monday, July 9th, 2018, formed an alliance with over 30 political parties and announced a new name called Coalition of United Political Parties (CUPP) and Nigerians cannot help but be pleased with the latest political development in the nation's political landscape.

Even to the uninitiated, this bedding of strange bedfellows called CUPP, sealed by the PDP and it's 37 satellite political parties were not in any way novel or exciting, a similar alliance gave birth to the ruling All Progressives Congress (APC) in 2014.

The APC was borne out of the need to rescue the Nigerian ship from internal devourers aka the political cabal masquerading as the captains to her Promised Land destination.

The political cabal held the nation by the jugular while her people fed on the crumbs falling off their dining tables.

CUPP was borne out of the political elite's desperate need to grab a hold onto the power President Muhammadu Buhari had taken from them before the nation finally slipped out of their grasps.

Take a good look at the composition of CUPP and you will see the political elite behind the various upheavals bedeviling Nigeria since the beginning of time.

The APC was a merger of parties which resulted in the registration of a political party needed to rescue the country's political machinery from the chokehold of the former ruling party (PDP) which was hell-bent on taking the country to the abyss of no return through mindless looting of the treasury without fear or consequences.

CUPP, on the other hand, was borne out of some entitled politicians' sensibilities and need to settle personal scores with President Buhari for denying them access to the national purse.

With Buhari, access to the public is not business as usual. The flow of illicit funds had dried up through the implementation of fiscal policies like the Treasury Single Account (TSA) and the Bank Verification Number (BVN).

Buhari endured a love-hate relationship among the political elite, their cries of, "Baba no dey drop," rent the air because it is an open secret he would not trade his integrity for filthy lucre.

Buhari, while he was the darling of the masses, became the enemy of the political elite, even with his own ruling APC, because he would not play ball with treasury looters. The plot to unseat him over his unyielding stance on the anti-corruption war which haunted many in the opposition party had been on since his inauguration on May 29th, 2015.

Do not look too far, the people desperately looking for Buhari's fall have herded themselves into the CUPP.

The plot to unseat President Buhari in the 2019 elections is not entirely surprising to the Nigerian electorate; Nigeria has a leader fearless in the face of multiple challenges facing her peoples. But the price to pay for the restoration of sanity to public office has been laced with many booby-traps, Buhari had warned that corruption would fight back, and the warning did not go without passing.

For attempting to pull down the house that corruption had built since the return to democracy, Buhari earned the scorn of the political elite, and they, in turn, made sure the people felt the heat.

Because the tap of illicit funds had run dry, the political elite infiltrated the streets and spread news of Buhari impoverishing the nation with his tight-fisted fiscal policies.

He got the blame for every economic woe, even those beyond his control like the 2015-2017 crash in international oil prices, the economic sabotage in the public service occasioned by errant members of the ruling APC as recorded in the budget padding saga and the arbitrary delay of the 2017 and 2018 appropriation bills.

Who else benefits from budget padding but the political actors who make up the CUPP?

For dealing bribery and corruption a deadly blow, Buhari would have been celebrated in other climes but back home, he was slandered and blamed for taking food out of the ordinary Nigerian's mouth.

The growth Nigeria was looking for required sacrifice on the part of her peoples, the political elite painted and helped propagated the message that Buhari was on the path to ruin Nigeria and her resources.

Nigeria's previous economic managers failed to add a kobo to the foreign reserve at $29billion when oil prices were at an all-time high before 2015.

Buhari, on the other hand, supervised the addition of $18billion to make it $47billion as at the second quarter of 2018.

Abiding by the Rule of Law, looters were made to part with the illegally acquired loot for the first time in the political history of Nigeria under the Buhari administration.

The embattled looters, majorly members of the former ruling PDP, took to the streets, screaming accusations of witch-hunting.

President Buhari did not see the mission to rescue Nigeria's funds from looters as a personal one, no single repatriation was done outside the law courts, yet his detractors would not cease to pour opprobrium on him at every opportunity.

Buhari does not interfere in the arraignment of any member of the political class for corruption, not even when members of his ruling party like Babachir David Lawal, was involved.

Everyone would get his day to clear his name of whatever graft allegations in court, Buhari does not exempt or protect anyone.

When attacking his person failed, the political elite resorted to underhand tactics, the latest of which was the propagation of fake news. Buhari attackers are all in the CUPP of controversy.

Have you stopped to ask yourself why the good of the Buhari administration is under-reported and bad news like ethnic violence given the front pages of the electronic and print media?

Do you wonder why fake news has taken over the social media space?

Because someone is pushing the narrative of President Buhari being unfit for office, hence, Nigerians should deny him re-election in 2019.

Why did the age-long farmer-herders clash caused by ecological problems like desertification suddenly assume an ethnic coloration under the Buhari administration?

That's because it's what the political elite want Nigerians to think their president is protecting the marauding herders from the long arms of the law.

Nigerians should ask themselves why the outcry against the Federal Government's suggestion of funding cattle ranches now while there was no opposition against it when it was first mooted in January 2014.

The previous administration did not only suggest the building of ranches for herders, the project was funded to the tune of N100billion.

How come no one protested against the move in 2014?

It has disappeared because the political elite ate it. The funds they ate in 2014 culminated in the farmers-herders violence the lop-sided press has dubbed the Fulani herdsmen ethnic cleansing in 2018.

Freedom of expression and political association is an undeniable and inalienable right to every Nigerian, so the social engineering the CUPP is trying to create is not wrong, politics is a game of numbers and they are trying to win the 2019 general elections.

The motive, though questionable is not illegal either, the political elite can choose for themselves a leader who fits their aspirations.

But never again will Nigerians welcome the return of unbridled graft and corruption to Nigeria's political sphere.

None of the members of the shady coalition called CUPP has proven himself to be morally upright and bereft of corruption.

Each and every one of them has allegations of corruption dangling over their heads like the proverbial sword of Damocles, giving them their heart desires would return Nigeria to the dark ages.

They don't want to remove President Buhari from office because they share concerns about Nigeria's development, their concern is to push out the man who put corruption in a chokehold.

For Nigeria to remain on the path of progress, the anti-corruption campaign effort must be sustained among the political elite.

The change President Buhari is nurturing should not be allowed to die, the CUPP mission has already failed at the launch.

The APC is glad to get rid of its destructive elements, Nigeria glad the enemies of her progress have herded themselves into one coalition.

Now that we know who we are up against, we cannot wait to exercise our patriotic duty of electing the leader who cares about the true development of our nation.