Actress Foluke Daramola's daughter opens up on why she dislikes acting 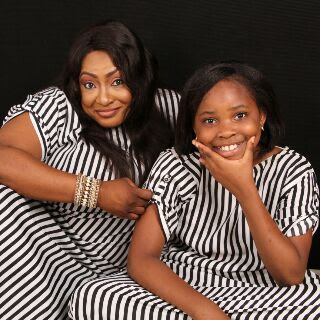 Like some of her colleagues, Foluke Daramola-Salako, has joined the league of Nollywood divas whose children have delved into entertainment. However, unlike her mother, Ibukunoluwa, is not an actress but a reality television host.


Regarded by some people as Africa’s youngest television host, the 11-year-old is not only inquisitive to know about her Yoruba cultural heritage, she embarks on an adventure that takes her round the various cultural sites and she tells the story in her own way.

In a chat with Saturday Beats, she explained why she hates acting.

“I liked acting before until they gave me a role I really hated. I was asked to play the part of a rape victim. I don’t know why I dislike the role but it just made me hate acting. If I am given a better role, I might still act. My real ambition is to be a doctor so that I can take care of my parents when they are old. Even though I am now on the television, my status has not affected me as a person and I do not see myself as a star. I see myself as somebody who is educating my peers and telling them to learn from our culture. My reality show is just to let kids like me know more about their culture and language. My parents came up with the idea and when they told me about it, I was happy. I don’t think it would disturb me especially in school and I am sure I would enjoy it. I speak in English but most times I speak in Yoruba. Anytime I speak Yoruba to my friends in school, some of them usually say that they cannot keep up with the way I speak and I tell the person to explain to me how she would not understand her language as a Yoruba person. Some of them ask me if they must understand their language but I tell them that it is their choice; it is something they need to learn. If they don’t want to speak it, I cannot force them. I am very good at Yoruba language and I can recite some ewi,” she said.

The lass was quick to note that her project would not affect her education in anyway.

She said, “I don’t think the programme would disturb my education. Some scenes from the show would show me in my class paying attention to my studies and nothing is disturbing me from speaking Yoruba language while learning.”
at 4:14 PM