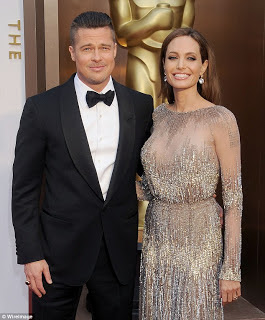 According to a report by Us Weekly, Angelina Jolie has blocked Brad Pitt's phone number on her phone, after she filed for divorce from him earlier this week. Us Weekly reports below


Cutting all ties. Angelina Jolie took extreme measures to sever lines of communication with her estranged husband, Brad Pitt, after filing for divorce, a source tells Us Weekly. “Angelina has blocked all incoming text messages and also Brad’s numbers,” the insider tells Us.

Jolie, 41, made headlines on Monday, September 19, when she filed for divorce from Pitt, 52, after two years of marriage, ending their 12-year relationship.

A source close to the Allied actor told Us that Pitt was “blindsided” by Jolie’s filing.  “He is beside himself and has been crying,” the source said. “He was completely caught off-guard and blindsided and had no idea she would do this. Angelina filed the court papers a minute before the courts closed on Monday night. He didn’t have a lawyer or anything. She had threatened divorce in the past but he did not think she would file this time.”
at 10:38 AM