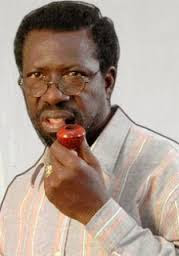 Kasumu, real name Kayode Odumosu, in an interview with Encomium denied the reports circulating in the media that he lost his sight due to deteriorating health.


“There’s nothing like that. Maybe because of the fact that they don’t see me often in movies. I give glory to God,” the actor said.

Recall that in 2013, Pa Kasumu sought help from fans to pay his medical bills after he suffered a stroke that affected his vision.

Fast forward to this year September reports surfaced that he went blind and was moved from his Abeokuta residence to his sister’s home.

The veteran has however addressed fans, but noted that he hasn’t been able to return to India for further treatments.

“The only thing is that I have not been able to go back to India for further treatment and medical checks because I have lost my passport," he said. "Even, if I get the passport now, I don’t have the money to embark on the trip now. But I still hope to go any time God blesses me,” he continued.
at 11:27 AM