According to multiple eyewitnesses, Russell Crowe invited 10 people to his hotel suite at a Bev Hills hotel, for dinner and to listen to music. One of the guests he invited was RZA, who brought Azealia along.


According to news reports, while they were listening to music, Azealia laughed out loud at Russell's music selection and called him and another guest, "boring white men."

"You would love it if I broke my glass, stabbed you guys in the throat, and blood would squirt everywhere like some real Tarantino sh*t."  And dropped a few n-bombs for good measure.

Still Russell Crowe remained calm but as soon as Azealia reached for her glass, cocked it back,

Russell had had enough. He walked to her, grabbed her in a bear hug and carried her out of the suite.

He then called hotel security guards who removed Azealia from the grounds.

However, Azealia posted a different version of what happened in the hotel on Facebook, claiming Crowe called her the nig*a, choked her, threw her out and spit on her. She wrote: 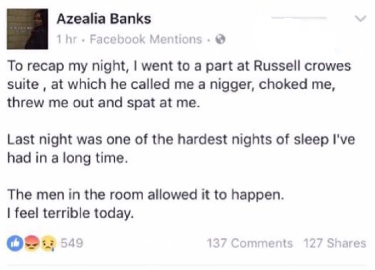 After she posted the message on Facebook, a lot of people didn't believe her account, saying she was lying.

When TMZ contacted her friend, RZA, he confirmed that Azealia Banks was erratic at the hotel and that it was Azealia that used the word nig*a, not Russell.
at 10:29 AM