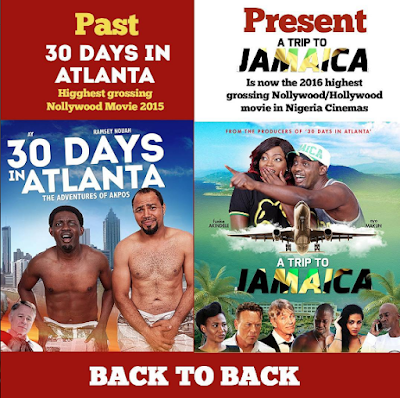 It’s another good news for Comedian AY as his movie ‘A Trip to Jamaica’ has broken his debut movie’s record as the highest grossing Nollywood/Hollywood movie in Nigerian cinemas.


‘30 Days in Atlanta’ was the highest grossing film of 2015 in Nigerian cinemas, beating other Bollywood, Nollywood and Hollywood films.

The movie has beaten the box office revenues of all the big budget Hollywood Titles released in 2016 here in Nigeria. These includes BATMAN VS. SUPERMAN, CAPTAIN AMERICA, SUICIDE SQUAD, LONDON HAS FALLEN, GODS OF EGYPT, TRANSPORTER, DOCTOR STRANGE, TARZAN, MAGNIFICENT 7 and CENTRAL INTELLIGENCE.

Thanks to you all for going to the cinemas to see Nollywood movies.

The movie, which was released in September was produced by AY and directed by Robert O. Peters.

According to the Executive Director of Filmone Distribution, Moses Babatope, the movie has brought in about N168 million revenue at the box office.