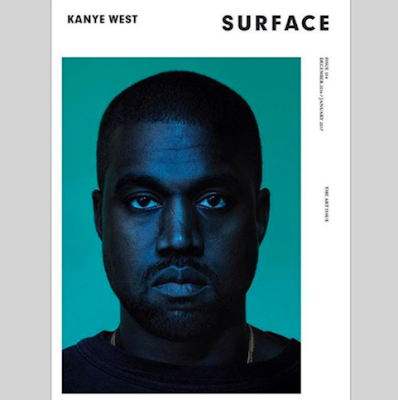 In a new and rare interview for Surface magazine, musician, fashion designer, and artist Kanye West shares his plans to make the world a better place.


Kanye West speaks his mind, and he couldn’t care less what people think. This has made him one of the most loved and hated artists of our time, in addition to being one of the most critically acclaimed.

Talking about interviews he says “I’m really bad with answering questions. Usually, I don’t even answer them. I try to find inspiration inside of the question. I think, and I jump from one beam of inspiration or energy to the next, as opposed to explaining the energy. In general, the hard part about interviews, for me, is the idea of two plus two equals four. I always refuse to land at four. Landing at four is hella basic.”

On his idea of Utopia he says “I don’t think people are going to talk in the future. They’re going to communicate through eye contact, body language, emojis, signs. Imagine that. If everyone was forced to learn sign language. When I was a kid, I’d see people who only spoke sign language and think, Wow, that’s gotta be difficult. I was really happy I could speak. Now, I would prefer to [West pantomimes someone signing], do that without having to use words. It’s funny because I’ve made a living off of words, but words get in the way of what you really want to say.”

On people being born with a certain taste, he says “I’ve been struggling with the word taste. Who’s to say having good taste is a good thing? Some people say everyone was born an artist, and society and their parents beat it out of them. After I said I was going to run for president [at the 2015 MTV VMAs], I saw a video of someone making fun of me about it. I was thinking, Wow, if this person had been doing this to me from the age of 3, I would have never been me. People say geniuses are kids with good parents. How do you nurture the things that people will call weird into something that could be considered exceptional? Maybe this will be an eloquent interview. It’s a 50/50 chance every time I open my mouth. At the end of the day, words get in the way. Regardless, whether you understand this or that, you know it’s Rain Man sitting here. You just fucking know it’s Rain Man. No matter what Rain Man’s doing, you know, if you take him to that fucking table, he’s going to pick the right cards.”

On skin colour he says “Skin color. I’m not saying “currently,” as if I’m going to change. I’m saying currently because—I’m actually not that good at words; it’s better when a beat is on. What I mean by currently is that 10 years from now to be black is going to be a completely different thing, because of what we’re doing now.”


On merging music, fashion, art and design, he says “What’s more important, design or art? Design is the ability to put structure to art, and art is the ability to break from structure. It’s like a man and a woman, and obviously the woman, in the traditional sense, is the artist. I don’t have an answer. I’m just posing this as a question. The only good thing about a project being finished is that it can give you, possibly, if people like it, the opportunity to work on more projects. So is it about the work, or is it about working? If it was truly about working, that you could move like a shaman from project to project and just sprinkle some magic on each one, and not have to worry about digging your feet into the ground [to gain] the respect of f*cktards that couldn’t—I’m trying to use a better example than put their left and right shoe on correctly, but it’s just the best one. These people do not have the education; they just have the money and the position. I believe in always empowering people. I don’t want to give you anything as definitive as “always do this.” It’s about finding a balance between being the person who knows the most and the person who’s the most naïve.”

Click here to read the full interview
at 3:43 PM