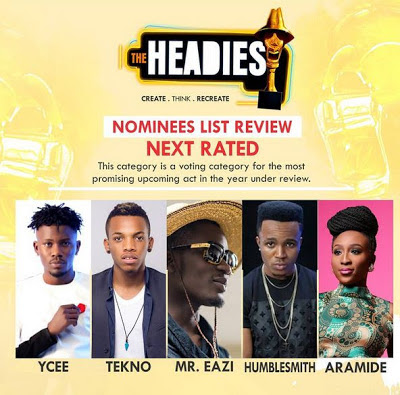 Ever since Tekno was named among the nominees for the Next Rated category at the 2016 Headies Awards, he has shown his deep displeasure at still being counted as an 'upcoming artist'.


He went online to say he has been too long in the game to be placed in that category. He took to Instagram to say "‘Next rated after how many years! Let’s be honest pls".

The organisers of the Headies awards have come out to explain why Tekno still remains in the 'Next Rated' category, despite having released his first single in 2013.

Over the years, Nigeria’s most prestigious music award, The Headies has strived for excellence in building the award on true values of integrity, transparency and responsibility. We have worked hard to reward artistic ingenuity since day one and also educating the teaming fans of the award, the public and the entertainment industry about the rules of the awards and the criteria for nominations in each category. Often times, we realize that the fans, people in the industry and the media are either misled or not paying attention to the rules and criteria for nomination.

Hence, it is important to set the record straight and continue to enlighten the industry and the fans. We recognise how important The Headies is to our industry and we will not take information for granted.

Next Rated for example are officially unreleased artiste in the year under review. This means, no matter how good or popular your song may be, how many hit singles or how many good music videos you may have, if you have not recorded and released an official album, you are still eligible to be nominated for that category. In the same vein, you may start your career a year ago, as long as you have released an album, will not the eligible for nomiation in the Next Rated Category.
at 2:28 PM