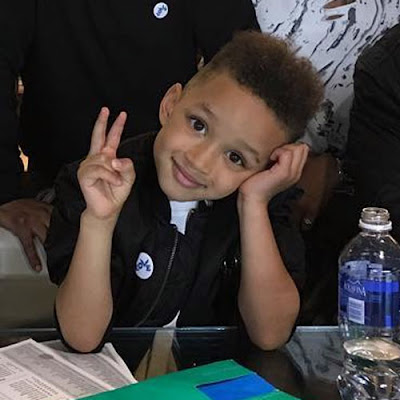 With multiple Grammy Awards and hit records under her belt, Alicia Keys is clearly no stranger to making headlines.


From her empowering decision to forgo wearing makeup at the 2016 MTV Video Music Awards to her newest role as a mentor on NBC’s The Voice, Keys is often recognized as an influential elder stateswoman of R&B and soul. Having written her first song at the age of 14, and winning her first Grammy at 21, Keys’s prodigious musical talents extend to her family as well.

Keys and her husband, hip-hop recording artist and producer Swizz Beatz, regularly post and document their lives on Instagram. Proving the apple doesn’t fall far from the tree, Keys and Beatz’s 5-year old son, Egypt Dean, is also making his foray into the musical world, with Beatz recently sharing a video of Egypt dropping his first single, “Super-boy,” which the youngster wrote and produced himself.

If that wasn’t impressive enough, Egypt also served as a producer on Kendrick Lamar’s Untitled Unmastered project. Based on Egypt’s musical pedigree, it’s safe to say we’ll be seeing more of the gifted prodigy for years to come.

Watch the video below