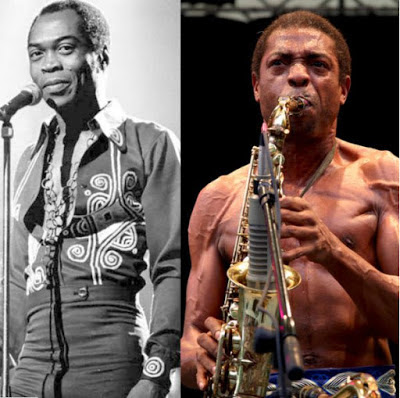 Femi Kuti, the first son of late Afrobeat legend Fela Kuti has in a very interesting interview given an expose about his unconventional childhood, revealing how his father kept him out of school and used him as an experimental guinea pig to prove that one did not necessarily need formal education to be successful in life.


Fela wanted to prove to his brothers that it wasn't his foreign education that made him successful and thus used Femi to prove it.

Speaking to NET, he said:
My father didn’t want me to study music because I was more of an experimental guinea pig to prove a point that you do not need education to be successful and he wanted to use me to prove to his brothers that the education he got was not what made him, so I was like a guinea pig which I really vehemently protested against but when I became successful and I complained again, my father said ‘are you famous? Are you not successful? Oya shut up.’

He continued,
‘But I was still very angry because I’m more of a street boy. I may speak well, it’s because I read a lot of books and I’m very well informed but my father wanted me to be more like an area boy. Back then if I got back from school and said I got ZERO in Mathematics, he’ll say that’s very good. I used to be among the bad boys in school that’ll jump the fence to go and watch Chinese movies at the cinema and if we get caught and my father hears about it, he’ll say ‘very good’. My father wanted me to be the head of the ‘most baddest boys’ in school (laughs). If I did well in my science subjects, he was very unimpressed but if I did bad things, he’ll be like ‘that’s my boy’ because that’s what he wanted and in the long run you could say he proved and made his point because I became successful.’

Femi added that,
‘I didn’t get the education and my mum, his brothers were all so scared that I’ll be a complete failure. Nigeria wrote me off, you can’t imagine how big my father was in those days and then his first son (me) had no school no education, smoking igbo, doing all the bad things everyone else was running from. I was totally written off. Back then If a girl introduces me to her parents they’ll be the end of the relationship, even my marriage broke up because of such stigmas of being Fela’s son. So if you look at it well, I’m not supposed to be successful, I should not have been nominated for a Grammy, I shouldn’t have won KORA Awards, these things are not important to me, but those that know my history know the significance because I was a failure.’
at 3:07 PM