10 Biggest Celebrity Fights Of The Year 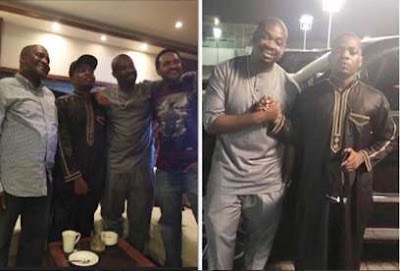 Don’t cross these stars! They have proved over and over again that they can get messy when dragged or scorned.


The fights this year began on January 1 on live TV, from here it moved to social media while some people even took it to the club and broke bottles. It was a battle of titles, egos and baby mamas.

Below are 10 celebrity fights that totally made our year!

1. Olamide vs Don Jazzy
We hadn't even entered the new year proper when on January 1, 2016, Olamide publicly expressed his displeasure when Lil Kesh, failed to win the coveted Next Rated award at the Headies.

The rapper used swear words on stage before leaving the award ceremony in annoyance.

Don Jazzy who felt Olamide’s display was a shade at his own protege, Reekado Banks, who won the award got on stage and told Olamide they didn’t need the car prize that comes with the award.

An angry Olamide took to Twitter to diss Don Jazzy. Even going as far as telling him not to cross over to the 'mainland'. Luckily, Nigerian billionaire Aliko Dangote waded into the matter and called for peace.

2. Davido Vs Dele Momodu
The paternity battle between pop star Davido and The Momodus started on December 31, 2015 but it spilt into this year.

Davido took shots at the mother of his child saying she was unfit to be a mother and was responsible for the traces of marijuana found in his daughter. The Momodus, on the other hand, claimed Davido’s family kidnapped the baby from her mother Sophie Momodu.

The HKN star then sang about the drama on 'Osinachi' remix. Ever since the two families have been exchanging words on social media.

3. Dammy Krane vs Wizkid
Apparently, Dammy Krane hinted that Wizkid used materials that were not originally his and did not credit the actual owners.

Their falling out led to an infamous club fight in the early hours of Friday, January 15, 2016 at Lagos nightclub Quilox where Wizkid allegedly threw a bottle at Dammy Krane cutting his lips.

4. Wizkid Vs Linda Ikeji
The beef started when Linda Ikeji revealed that Wizkid had fathered a second child and said he was a “deadbeat” father in a post on her website.

Wizkid took his pound of flesh when Linda Ikeji fans accused her of buying an overpriced fake Birkin bag drama. Linda Ikeji fired back by posting on her blog that Wizkid has been evicted from his mansion in Lekki.

The pop star would go on to make threats at the blogger which saw him invited to the police station.

5. Peter Okoye Vs Jude Okoye
Pop group, Psquare, had its biggest challenge when Peter Okoye said he wanted out of the group because of differences with his manager and elder brother, Jude Okoye.

This new information saw fans crying and pleading for the group not to split.

Accusations were made, names were called but finally Peter, Paul and Jude Okoye agreed to stop attacking each other publicly.

6. Blackface vs Wizkid/2face Idibia
Nigerian singer and member of the defunct Plantashun Boyz, Blackface entered the ring and took part in an all star celebrity fight.

Blackface blasted Wizkid and his former band member 2face on Twitter for taking his songs without his permission.

These claims were coming after the Wizkid/Dammy Krane brouhaha. While Wizkid continues to ignore Blackface, 2face has said he is disappointed in the singer.

Their breakup was even messier than her marital drama.

The two were engaged in a war of words on social media and in several interviews. Egbegbe was once reported saying he would end her career in the movie industry.

8. Kemi Olunloyo Vs Dayo Amusa
Their beef started on June 13, 2016 when Dayo Amusa called out Olunloyo for tagging Jide Kosoko a ritualist.

Amusa called out the social media ‘queen’, tagging her a psycho who is frustrated.

Olunloyo not going down without a fight took to Facebook to reply and drag the actress labelling her a prostitute, “diabolical bitch and whore”.

9. Oritsefemi Vs Quilox
MSN Gang label artiste, Oritsefemi was assaulted by a group of bouncers at Quilox nightclub, Victoria Island, Lagos on November 11, 2016.

The incident occurred following an altercation with one of the club bouncers, Sound Sultan and Oritsefemi.

A video capturing the event saw the club security officials drag off the artiste while people present at the once drama free nightclub echoed that he be released.
Oritsefemi allegedly split a bouncer's face with a bottle and he, Oritsefemi, was beaten by bouncers.

Ibinabo proceeded to call him a madman who lived in a hotel. Fiberesima and Ike have been at war of words over the last 12-months to determine who leads the Actors Guild of Nigeria, AGN.
at 9:44 AM