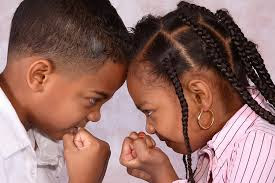 The term argue has gotten a really bad name and I think it's because we don't see true arguments anymore. We see two people getting emotional about topics they disagree on. We see people offended and responding offended but that is not arguing


You will both bring your "evidence" that will "prove or reveal" why you think what you think. It truly can be that simple but our pride gets in our way many times. Oftentimes, our "proof" is based on subjective truth, filled with emotion and we simply refuse to hear the case of the other. Oftentimes, you know you are in a pissing match because they attack your character, your intelligence and your entire countenance.

Below are three reasons why our children need to be taught to argue.

1. It prepares them for the world
You won't be there when they go to college mom and dad. If you are, well, that's kinda creepy. There is nothing more frightening for a kid that has never learned the value of a good argument to hit their first college class and be slammed by an atheist professor. It happened to me. All I could say to his taunts was, "I have faith."

2. It prepares them for different view points, even in the Christian circle
How can you argue for something when you don't know what the "it" is? I see so many believers falling to false doctrine because they don't know what they believe and how to argue it. When they get into an argument, they have no idea how to defend it. Our children need a world view. Our children need to understand their viewpoint is not the only viewpoint. It will make them better arguers.

3. It pushes them to "own" their thoughts
When you are taught to argue your point, it requires you to claim that information. I make my students teach my Rhetoric class, not because I'm evil (insert evil laugh here) but because I know when they take charge of the information, they own it and retain it.