Fellaini spotted in Milan amid rumours of a Manchester United exit 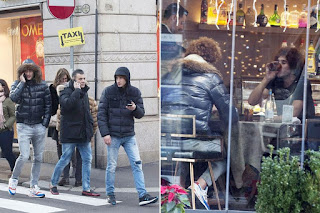 Marouane Fellaini is very much persona non grata among Manchester United fans these days, not to say borderline pariah.


Having been signed by David Moyes and hence always associated with that failed regime, the Belgian has never managed to win over Red Devils fans.

And much to their horror, he found favour under Mourinho early on this season.

But having been relegated to the bench of late following the return of more skillful players like Henrikh Mkhitarayan and Anthony Martial, the majority of United fans were probably hoping they’d seen the last of Fellaini.

He emerged as a key player during the two Van Gaal seasons, and when Jose Mourinho was appointed this summer, he spoke of giving Fellaini the ‘love’ he deserves.

Mourinho used Fellaini quite a lot early on, but it seems the Portuguese has realized that he could lose the fans if he continues with the Belgian.

And now it seems as if the Belgian is set to leave.
Fellaini was spotted in Milan with his brother today, and while he could have been on a simple shopping trip, the Mirror believe he was there on business – to investigate a move to Serie A giants AC Milan.

The paper claims Fellaini has spoken to United teammates about leaving, and that the Rossoneri are interested in signing him this January.