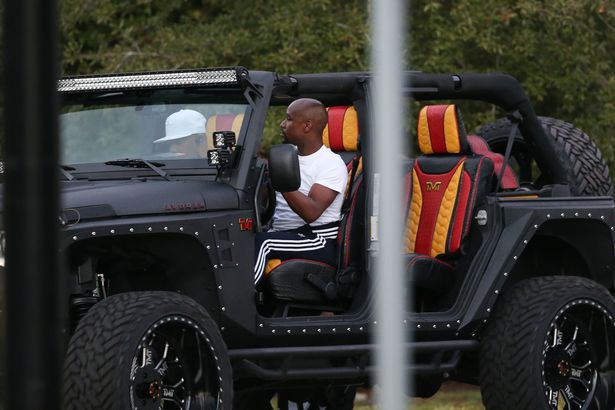 Floyd Mayweather has a penchant for extravagance - and he displayed that as he cruised around Miami with pals in his customised Jeep.


The retired boxer was snapped driving the personalised vehicle around Florida with the top down on Monday.

Not for the faint-hearted, the Jeep boasts red and yellow seats with the letters 'TMT', the acronym for Mayweather's brand 'The Money Team', embroidered into the back of them.

The American has a lot of free time on his hands after retiring from boxing with an undefeated 49-0 record in 2015.

There has been talk of him picking his gloves back up again to face Irish UFC fighter Conor McGregor - and that speculation has only heightened since the Irishman was issued with a boxing licence last week.

McGregor confidently claimed he will knock Mayweather out if the pair end up fighting.

"I wouldn't go in there just to show up. I'd go in there to knock him (Mayweather) out," McGregor said.

"He can be hit. He’s been hit before. Age waits for no man, also. So I know they know that.

"I know the size, the reach and the youth is on my side. There’s a lot to lose for them. So that’s why they’re scrambling.

"But that’s OK. I’ve got some other boxing opportunities and potential opponents in mind, some previous Floyd opponents.