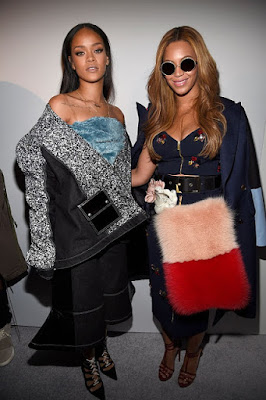 The “Work” singer wants everyone to “drop this topic.” She dismisses the suggestion of her having a beef with Jay Z’s wife, adding, “We don’t need to be putting black women against each other! We deserve to be celebrated, and the Grammy Academy agrees!

Rihanna accidentally fueled longstanding rumors of a feud between the women on Instagram yesterday after Grammy nominations were announced. It all started when RiRi “liked” a photo on a fan account that read, “Congrats and all to @badgalriri and all for her 8 Grammy nods but tbh f–k them because they snubbed her for Song of the Year and Album of the Year… I think they didn’t want her tied or passing someone else *cough cough* [lemon emoji]… f–k you Grammys.”

With her nine nominations for Lemonade, Beyoncé is the most-nominated female artist in Grammy history. Bey is also the artist with the most nominations this year; Rihanna, Drake, and Kanye West tied for second place with eight nominations each.

Well, Rihanna is speaking out about that double tap. Apparently she was just “liking” the photo of herself and didn’t read the caption. After realizing what was written below the pic, Rihanna posted the following in the comment section.

Rihanna and Beyoncé have constantly been plagued by rivalry rumors over the years.