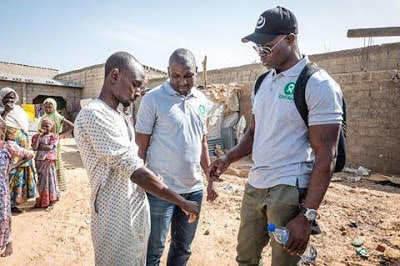 Beninese Hollywood actor Djimon Hounsou, was recently in Nigeria with Oxfam International to draw global attention to the humanitarian crisis in the northeast. Before departing, he paid a visit to entrepreneur and Chairman of Heir Holdings, Tony Elumelu.


While in Maiduguri, the Oxfam ambassador visited Jakana village, where he met a woman whose husband was arrested by the Nigerian Army

“While I was in Maiduguri, I went to a nearby village called Jakana. Here I was reminded that Boko Haram isn’t the only side in this conflict. I met a woman there whose husband was arrested by the military two years ago. She hasn’t heard from him since. And now her and the children do not have enough to eat. Yagana isn’t alone. Thousands of women have lost their husbands to Boko Haram and the military. It saddened me to see so many women that are left to care for their children”

The ‘Blood Diamond’ star and ex-husband of Kimora Lee Simmons also spent time with Mohammed at the home he shares with his mother, sister, wife and their five children.

“Mohammed was a farmer and trader, and used to cycle to Maiduguri to trade. Because of this, he was suspected by Boko Haram of being an informant. He was kidnapped and beaten. He was eventually released, and fled to Maiduguri, where he was reunited with his family. They now live in terrible conditions. Mohammed’s story is shocking, but he is not alone. Almost 2 million people have been forced to flee their homes because of the conflict in Nigeria alone, searching for safety for themselves and their families. Millions more are also affected by this crisis in the rest of the Lake Chad Region- in Niger, Cameroon and Chad. I’m here to listen to their stories with Oxfam and to shine a spotlight on this unknown crisis.

The 52-year-old actor, who has since returned to the U.S. pledged to tell stories of victims of Boko Haram insurgency.

“I have made it my goal to bring the story of people who are caught up in the conflict to the world and shine a light on the issues they are facing. I have listened to so many stories and I have met with people who make tremendous efforts to give support to their neighbours. It is beautiful to see how people have unconditionally opened their doors to the people who have fled their homes. It’s my obligation to help make sure people who are caught up in this crisis get their basic needs fulfilled – such as water, food and sanitation.”
at 5:37 PM