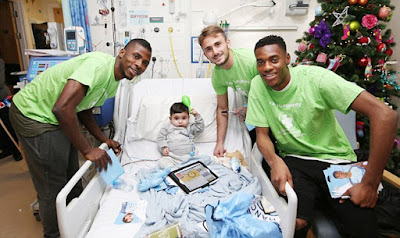 
It was however not revealed how much each player donated, according to the Daily Mail.

Iheanacho was one of the six first team players, City boss Pep Guardiola led to cheer hundreds of youngsters during their annual visit to the Royal Manchester Children's hospital.

Iheanacho who has made 11 English Premier League appearances, scoring once, was joined by John Stones, Alex Kolarov, Pablo Zabaleta and Willy Caballero.

Commenting on City's visit, Guardiola said at the venue: "Today, the team has come together to see the life-changing work the hospital and its staff are doing every day right here in Manchester – it's a very special place," Guardiola told Daily Mail.

"The kids were so happy and to see the smiles on their faces was fantastic. We are part of this city and if we can help them for a short time, then it's an honour.

"A big thank you to the people from the hospital, they are the real heroes. As the manager of Manchester City, thank you so much.

Manchester City take on Arsenal on Sunday in the English Premier League fixture.
at 12:36 PM