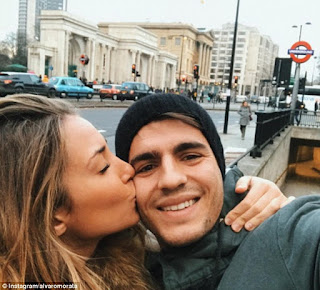 Real Madrid striker Alvaro Morata has made the most of Spanish football's winter break by jetting off for a short break to London with his fiancee Alice Campello.


The Real Madrid striker was part of the squad who secured a memorable Club World Cup triumph in Japan at the weekend.

And with the La Liga giants not playing until January 7, Morata has decided to visit England with his glamorous partner.

The couple posed for a cute selfie outside London's Hyde Park Corner tube station - just a stone's throw away from Winter Wonderland.

Morata, who returned to Madrid in the summer after starring in Italy with Juventus, captioned his post: 'Holiday'.

The Spain international has struggled to hold down a regular first-team spot at the Bernabeu, making 21 appearances in all competitions this season.
at 12:23 PM