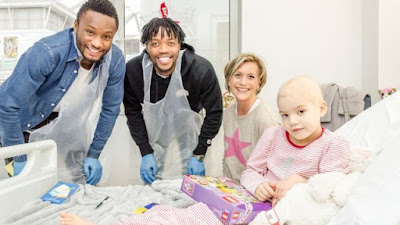 Super Eagles' Mikel Obi and Victor Moses were part of the Chelsea squad that paid a surprise visit to children and their families at the Chelsea and Westminster Hospital on Wednesday.


Mikel and Moses, along with their Chelsea teammates, delivered presents for the kids, posed for pictures and signed autographs around the wards.

The visit was made following Wednesday morning training session at Stamford Bridge ahead of Chelsea's Boxing Day Premier League home clash against Bournemouth.

From the Chelsea and Westminster Hospital, next stop for the players was the Bridge Kids Christmas Party where the players took selfies and signed photos with the kids.

The highlight of the visit at the Kids Christmas Party was a quiz at the end between two teams consisting of two of the kids partnered by David Luiz and Victor Moses, with the final challenge for the youngsters an impression of Antonio Conte on the touchline.

Chelsea are still top of the league table on 43 points, with Liverpool second, six points adrift.

Moses is expected to feature for Chelsea in Monday's league clash against Bournemouth while Mikel's future at the Bridge is still undecided.
at 11:22 AM