Singer and sound engineer Sheyman secretly walks down the aisle 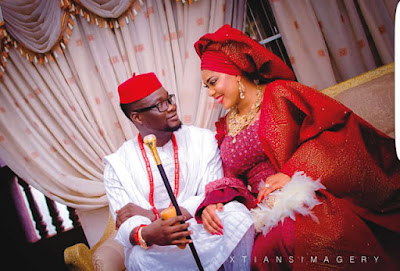 
The gifted entertainer tied the nuptial knots with his lover, Cynthia Okoronkwo, in a traditional wedding ceremony that took place at the bride’s home in Ideato Local Government Area of Imo State on November 26th  2016 with only the members of their families and close friends in attendance.

Apparently determined to avoid the attention of other members of the public, the singer quite tactfully ensured that none of the pictures from the event were posted on social media platforms till date.

A source close to the artiste said he tried everything possible to keep the event very private. However, when contacted, Sheyman said he did not see anything secret about his wedding. “Marriage is a beautiful thing and there is nothing secret about it. Let just say we decided to make it known to only our relatives and close friends. Besides, this is also supposed to be my private life. I feel that a lot about me is already in the public space and I will like to keep it like that”.

Signed under Phatbase Entertainment, Sheyman is a popular Nigerian artiste and well sought after sound engineer. He has released several chart topping songs in his career which include Hotter Than Fire and Paper, a hit song he also featured Davido on the remix. His career got a major boost when he brought over 30 prominent artistes, include crowd pullers, such as Reminisce, eLDee, Waje, Durella, Ruggedman, Omawumi, KSB and Banky W together to record a tribute song for late Nigerian artiste, Dagrin in 2010.

As a sound engineer, he has mixed and mastered most of the popular Nigerian hits which Include Iyanya’s Kukere and Reminisce’s Kako Bi Chicken.