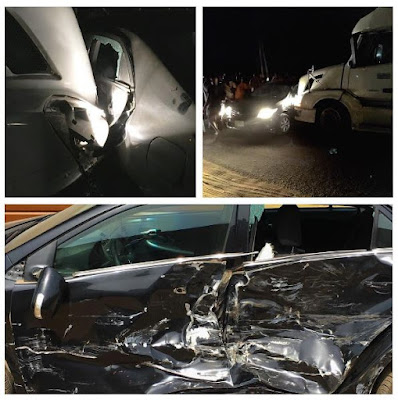 Media personality Ebuka Obi-Uchendu took a minute to share his near-death experience with his social media followers in a bid to remind everyone to be thankful and grateful this festive period.


According to him, this day last year he survived a near fatal accident after a truck rammed into his car.

Read his experience below.

Had a shoot at La Campaigne Tropicana and I remember leaving before my colleagues ‘cos I had to buy fuel in the jerry can I had in my boot. I’d noticed a fuel station with short queues on my way in earlier.
Christmas was two days away, it was my last day shooting and I was excited for that reason, even if there was this fuel scarcity matter that was just irritating.

My car windows were up, the AC was on and I remember Gbemi had just started talking on the radio when I looked to my left through the driver’s window and my world stopped…

There were massive headlamps right in front of my face with what looked like the nose of a giant metallic beast just inches away from me. It all happened in a split second but it was just enough time for me to realize I was literally about to be run over by a truck.

Instantly, there was impact!

The sound was deafening, and I lost control. In what then seemed like forever, the truck dragged me on for another 70 meters or so before coming to a stop.

I looked up and it didn’t seem like I was in heaven. I could also feel my face. I was still alive! Then I remembered my car’s fuel tank was on the side that was just hit. No way I would sit in an exploding car. But I was trapped. The truck was stuck to my door and my seatbelt wouldn’t come off…

I’m still not sure how I did it but I found my way through that locked seatbelt & out the passenger’s door in no time and then stood to watch the entire scene in shock with bystanders asking me if the car driver was dead. I’d gotten out so fast they didn’t know I was the driver.

But I’m alive today to tell my story and thank God for another year. I left the scene with only a scratch on my left arm and a slight fear of looking left whenever I’m driving. Extremely small price to pay for what could have been way worse.

So while we may have had a tough 2016 and might feel the need to complain, please try to enjoy the holidays this year knowing that things could have been worse for you. You just may never know. Be thankful guys!!! I sure am.
at 1:42 PM