Goalkeeper suffers horror injury after taking a boot to the head 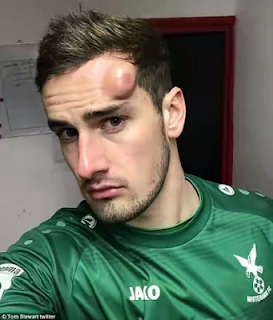 Whitehawk suffered a heavy 4-1 defeat to Dulwich Hamlets in the FA Trophy but the biggest casualty was their goalkeeper Tom Stewart who was left with a sizeable bump after taking a boot to the head.


The referee didn't see the incident and it went unpunished much to the chagrin of Whitehawk.

Whitehawk held firm until the 72nd minute before Gavin Tomlin scored two goals in the space of three minutes, followed by a third from Ashley Carew soon after.

Stewart, 21, took to Twitter soon after the final result to show off the seismic lump that had appeared on his forehead and also apologize to fans for the disappointing loss.
at 2:17 PM