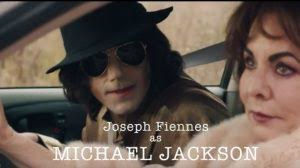 This might explain Paris Jackson's frustration. Days ago Michael Jackson's first daughter, Paris, revealed that she was outraged by Joseph Fiennes playing the role of Michael Jackson in a new TV comedy series.


Most couldn't understand her outrage because Michael Jackson looked more white than black in his later years. Now, an old interview Michael Jackson granted Oprah Winfrey in 1993 has surfaced to prove that Michael Jackson might not be pleased with being played by a white man.

During the interview, Oprah asked Michael about a rumour that he wanted a white boy to play him in a '90s Pepsi commercial and Michael replied calling the rumour stupid.

"That is so stupid. That's the most ridiculous, horrifying story I've ever heard. It's crazy."
He went on to say that he is a black American and proud to be so.

That's like you wanting an oriental person to play you as a child. Does that make sense? Please people, stop believing these horrifying stories."
at 2:51 PM