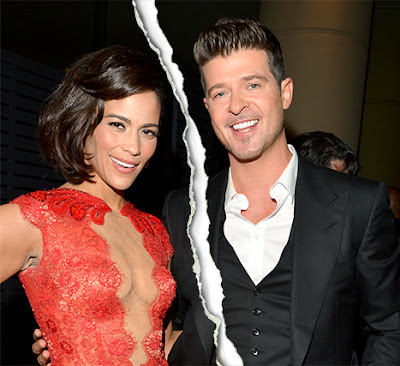 
His ex-wife, 41-year-old actress Paula Patton was in a Los Angeles court on Thursday to request an emergency hearing to ask a judge to restrict Robin's access to their 6-year-old son, Julian Thicke.

She alleged that Robin has been physically abusive toward their son by spanking him excessively, hence requesting that Robin only have monitored daytime visits. Paula wrote in her declaration:

"Over the past year, I have become concerned about Robin's drinking and drug use, as well as the forms of punishment he is using to discipline Julian. "My concerns culminated on January 4, 2017, when Julian's school called Department of Child Family Services (DCFS) to report what they believed to be credible allegations of abuse from Julian against Robin."

"We asked him to show us how hard, and I asked him to hit me on my back," Patton claims, saying she responded with an "ow." She adds, "Julian said it was worse than that."

Thicke denied any wrongdoing and said:
"On a very rare occasion and only as a last resort, I will use light spanking, but it is consistent with the law, open hand on the butt. This is the type of discipline to which Paula and I agreed during our marriage."

"It is my belief that Paula holds residual anger toward me because I and my family would not permit her or her family to attend the funeral of my father on December 20, 2016."

Alan Thicke died suddenly on Dec. 13 at the age of 69. Robin says in the docs that Paula "did not have a positive relationship with my father."

Robin also wrote that he is complying with the DCFS investigation and is meeting with a social worker on Thursday with his son.

"I understand that the social worker has already met with Julian, Paula, and employees from Julian's school, and that DCFS has not sought to remove Julian from my care, placed any restrictions on my custody, nor instructed Paula to withhold Julian from me. I have certainly not heard from anyone in this regard at any time".

However, the judge denied her request for an emergency hearing. The court found "there is insufficient showing of great or irreparable harm, immediate danger, or any other statutory basis" to grant Paula's emergency request. Paula and Robin married in 2005 after dating since they were teenagers.

They welcomed son Julian in April 2010, but announced their split in February 2014 after almost nine years of marriage. Their divorce was finalized in March 2015
at 12:04 PM