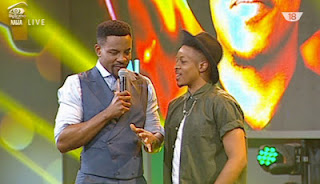 
JON OGAH walked away from the first season of Glo Naija Sings $100,000 richer in 2009 over close  contenders, Tarila and Thompson. After the drop of his debut video featuring Sasha – Gbedu, it seemed like he dropped off the radar, but he’s back on the Big Brother Naija show as one of the new but fake housemates.

Jon is not playing for the N25million Big Brother Naija competition so can't be voted for by the
public. Jon said his first target will be Bally.

ESE is a beauty queen and comedian and has promised to cause drama in the house. Her target, she says, is Uriel because Uriel feels safe.