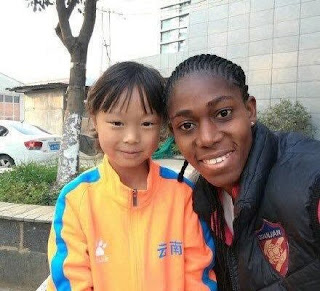 The details of Asisat Oshoala’s new contract with Chinese side, Dalian Quanjian, have been revealed.


The Super Falcons forward will earn N7million monthly – almost 7 times more than what she was receiving at Arsenal Ladies.

This was revealed by the chairman of Nigeria Professional Football League (NPFL) side, MFM FC, Godwin Enakhena.

He wrote on Twitter: “Oshoala to earn N7m monthly 1-year deal at Chinese side, Dalian Quanjian, almost 7 times more than what she was earning at Arsenal.”

Oshoala completed the transfer last week after failing to report for pre-season training with the English Women’s Super League outfit.

The 22-year-old last month denied she was set to quit Arsenal Ladies (http://dailypost.ng/2017/01/24/wont-dump-arsenal-ladies-china-move-oshoala/).

The reigning CAF African Women Footballer of the Year claimed the transfer only existed in the imagination of the reporter.

“I’m 100% at my club, Arsenal Ladies, I do not know the source of the report that I’m moving to China,” she told SuperSport.

“I’m 100% Arsenal Ladies nothing more than that I’m on a break in Nigeria, a longer break after a major championship, Africa Women Cup of Nations in Cameroon.”

Oshoala won the Women’s FA Cup with Arsenal ladies during her first year with the club.
at 3:54 PM