'Pete Edochie is my dream husband; All I want is him' - Nollywood actress Brown 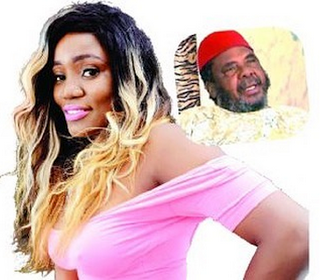 Actress Brown is a Nigeria-based Liberian Nollywood actress. She made the revelation in a recent interview with SunNews.

According to her, older men are the real deal and are more suitable for marriage because of their wealth of experience. She said:

“Since I was a child I have been crushing ‎on him. I still look forward to seeing myself in the arms of Pete Edochie. I don’t mind the fact that he is married; he is my dream husband. I like the way he talks, walks and acts.

Nobody else can substitute him in my life right now. Not even his younger version, Yul Edochie; he doesn’t entice me. All I want is Pete and not his sons or look alike! I love him regardless of his age. Older men make good husbands.

Age is just a number. If I love a 70-year old man, I don’t see why I shouldn’t marry him. I don’t have time for small boys still running around and wearing studs in their ears with lots of chains hanging around their necks.”
at 2:53 PM