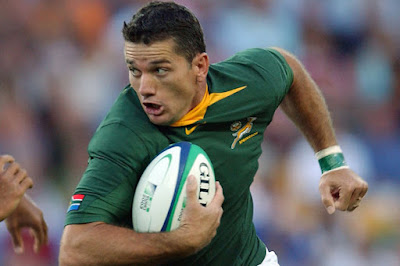 South African Rugby legend Joost van der Westhuizen, widely regarded as one of rugby union's best-ever scrum-halves, has passed away today at the age of 45 after his long fought battle with a motor neurone disease.


Joost was rushed to the hospital on Saturday in very critical condition and despite efforts by the medical team to stabilize him, he died today.

Mark Alexander, president of SA Rugby, in tribute to Van der Westhuizen said;
'Joost will be remembered as one of the greatest Springboks – not only of his generation, but of all time,'

'He also became an inspiration and hero to many fellow sufferers of this terrible disease as well as to those unaffected. We all marvelled at his bravery, his fortitude and his uncomplaining acceptance of this terrible burden.

'He could do things no one else could and it was his unpredictability as a scrum-half that dazzled opponents and gave his supporters so much reason to cheer,'

'Joost epitomised what it meant to represent South Africa on the rugby field and always showed a remarkable fighting spirit throughout his career, but also in recent years during his illness
at 4:33 PM