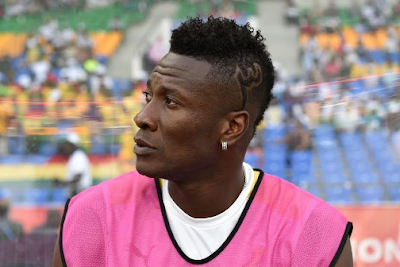 The Football Association of the United Arab Emirates has found Ghanaian striker Asamoah Gyan and 39 other football stars in the country, guilty of breaking ethical rules by keeping un-Islamic hair.


Islamic teachings reportedly ban ‘Qaza’ hairstyles because parts of the head are not shaved.
The ban comes after Gyan showed off his new mohawk – with ‘3’ shaved into the hair side – during the  just concluded African Nations Cup.

According to the BBC, Individual match referees judge whether players' haircuts are appropriate, parents in United Arab Emirates concerned about children copying the styles.

The UAE FA send a player's club a warning letter in the first instance, with punishments escalating to a fine and then a suspension if he does not comply.

Gyan is one of 46 players who is currently at the warning letter stage.

The former Sunderland striker, is on loan at Dubai-based Arabian Gulf League club Al-Ahli from Shanghai SIPG
at 2:48 PM