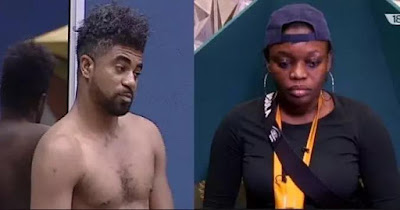 
Bisola, Bally and T-boss sat in the dressing room having a heated discussion about everything from stretch marks and pregnancies to child support when the conversation shifted to ex-Housemate, Thin Tall Tony and Bisola’s relationship.

Bally and T-boss argued that there was something deeper between the two of them, but Bisola kept insisting that they were just friends.

T-boss and Bally exclaimed, “Tony likes you!” while Bisola maintained that “It depends on” what you mean by “like”

Bisola then added, “We have a strong bond that will last a very, very long time!”

Jokingly Bisola said that T-Boss and Bally were trying to force something that might never happen saying, “How is she sure that he’s not married?”

And T-Boss responded, “I actually heard a few times in the House that he has a child.”

Bisola’s smile melted away, and she sat still for a moment as the words washed over her.

Taking time to pull herself together, Bisola finally said, “I don’t know about that. He told me his mum wants him to have a kid because he’s 36.”