I Didn't Insult Anyone! Lionel Messi Opens up on FIFA Ban 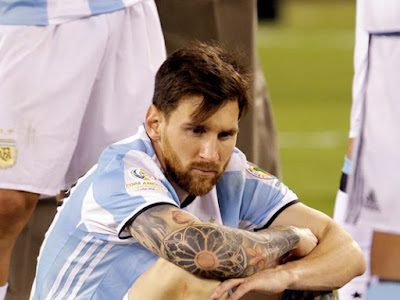 Lionel Messi has written to FIFA to request that his four-game international ban be overturned, El Mundo Deportivo has reported.

He was fined 10,000 Swiss francs ($10,160) by FIFA's disciplinary panel and is due to miss three more of Argentina's remaining four World Cup qualifiers, against Uruguay, Peru and Venezuela, after sitting out the defeat to Bolivia on Tuesday.

In the nine-paragraph letter, Messi claimed his words had not been aimed at the official and that he yelled "at the air."

"I vehemently deny having offended assistant referee 1 during the game against Chile, and more so do not believe that my conduct falls under article 57 of FIFA's disciplinary code," he wrote.

FIFA considers Messi to have breached the article by displaying "offensive behaviour" towards the assistant.

However, the Barcelona player wrote: "Assistant referee 1, of Brazilian nationality, perfectly understood what I was saying, so much so that we spoke amicably and at no time did my words offend or insult the official.

"If any of my words made assistant referee 1 uncomfortable, they were never directed at him but rather to the air and for that, I apologise."

He concluded by writing: "I hereby expressly request for the disciplinary case to be dismissed without any sanction against me."

Shortly after being elected as the new president of the Argentina Football Association (AFA) on Wednesday, Claudio Tapia told a news conference the federation was working on the appeal.

He told a news conference: "We have the best team of lawyers on this issue, trying to reduce Messi's suspension."

Earlier in the day, Barcelona released a statement expressing their "surprise and indignation" at the sanction.

The statement read: "The club considers the four-match suspension finally imposed on the Argentine player to be unfair and totally disproportionate.

"Finally, FC Barcelona wishes to reiterate its support for Leo Messi, an exemplary player in terms of conduct both on and off the pitch."

Former Argentina coach Cesar Luis Menotti told Cadena Ser: "He made a mistake and he should be punished, but not with four games.

"Messi has never done that before, not with the national team or with Barcelona.

"I think this is linked with the despair that there is in Argentina's football and that is transmitted to the players. Messi has led Argentina to three finals and is under pressure to deliver."
at 11:43 AM