German Referee Who Officiated Barcelona Against PSG Match To Be Demoted 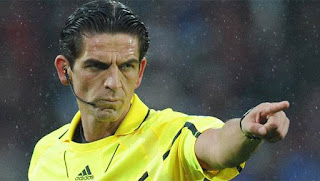 Deniz Aytekin is set to be sidelined by Uefa after the referee came under pressure for several decisions in Barcelona’s 6-1 win over Paris Saint-Germain.


The Catalan giants conceded an away goal to seemingly kill the game before and scoring three goals in the final seven minutes.

Neymar’s superb free kick in the 88th minute sparked a goal rush as Barcelona scored the winner in the 95th minute.

Aytekin consulted with his assistant before awarding the penalty.

The penalty decision that put Barcelona within a goal of pulling off the unlikely fightback was controversial as Luis Suarez went down under minimal contact.

Aytekin pointed to the spot much to the fury of the PSG players who had already seen the referee book Suarez for diving earlier in the game.

The German is now set to be taken off any future Champions League games and will not be given the chance to referee another high profile match this season.

Marca claim Aytekin could be demoted to lesser games and may even be sidelined from officiating all together as UEFA wait for the heat to die down.
at 1:15 PM