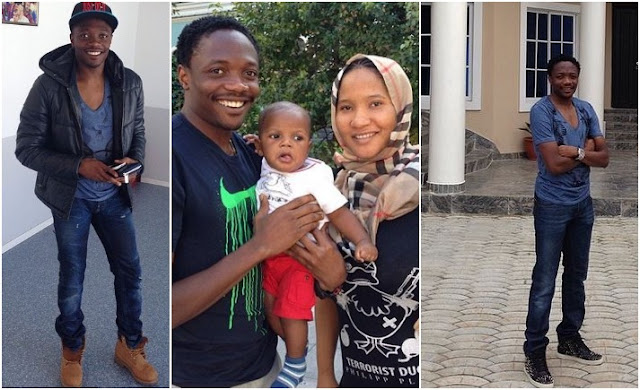 Leicester City footballer Ahmed Musa has been arrested on suspicion of attacking his wife.

The Nigerian striker, 24, was quizzed at his £850,000 five-bedroom home in Countesthorpe, Leicestershire, just hours after his side's 2-0 win over Sunderland.

Police received a domestic abuse complaint against the player, who cost the Premier League club a record fee of £16.6million.

No-one was in when they first arrived at the home so officers made inquiries with shocked neighbours in the upmarket neighbourhood.

The former CSKA Moscow forward was finally arrested at 1 am yesterday by two plain-clothed policewomen after he returned home.

The father-of-two Musa was grilled for allegedly beating his wife Jamila and was released without charge.

A spokesman for Leicestershire Police said: 'A 24-year-old man was arrested yesterday morning at his home address near Leicester on suspicion of common assault.'

A neighbour said: 'Ahmed is a nice guy. He always has a friendly smile. I don't know anything about his private life.'

Another man in the quiet road said: 'You never hear noise coming from the house. I had no idea the police had been called there.'

Musa was not part of the 18-man squad which beat Sunderland at the King Power Stadium on Tuesday.
at 11:47 AM