#BBNaija: 'Judges unfair in disqualifying me over sexual assault on Tboss' – Kemen

Remember Kemen, the Big Brother Naija 2017 contestant that was disqualified after he was caught on tape fondling another contestant, Tboss under the sheets without her consent? This was because she was asleep.
Well, Ekemini Ekerete also known as kemen has declared that judges of the reality television show were unfair to have disqualified him from the programme. 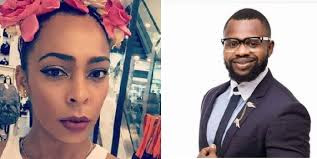 Following Kemen’s disqualification, the organizers of the show said it took them seven hours of deliberation, to disqualify fitness trainer.
Reacting to a question on whether the judges who disqualified him were fair, Kemen in an interview said,

“I don’t think they were fair but in their perception of the scenario, it is normal for them to take the decision they took because it was necessary at that time based on how sensitive they were to the issue.”

On if T-boss led him into touching her breast, the fitness trainer said,