Kim Kardashian speaks about her Paris robbery attack, says it was meant to teach her a lesson 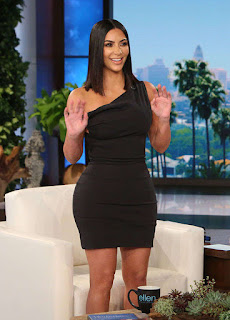 For the first time since Kim Kardashian's Paris robbery, the reality TV star was at the Ellen DeGeneres eponymous daytime show where she spoke about a lot of things, the Paris robbery attack she suffered being one of them.
She revealed to Ellen that she felt the robbery was meant to happen to her just to teach her not to show off so much.

Ellen began the interview by asking Kim about the experience of being bound, gagged and held at gunpoint, to which Kim replied:

She said there was nothing wrong with being excited about something you worked hard for and wanting to show it off, but she said with the robbery experience, she is now less materialistic and doesn't care so much for expensive jewelry. She went on to reveal that she likes the new person she has become, courtesy of the horrible experience and expressed her gratitude that her kids will get to see the new her and learn from her.

"I'm so happy that my kids get this me and that this is who I'm raising my kids (as). 'Cause I just don't care about that stuff anymore. I really don't. Like I said, everyone gets so excited when they get things. Or, of course when you get engaged, you're going to show off your ring. If you get a new car, I don't care what kind it is, you get so proud and you get so happy and you show that off on social media. But it's just...it's not worth it. Like, I don't care about that stuff. I don't care to show off the way that I used to. Even though there's nothing wrong, truly, it's OK if you're proud of that and you work so hard and you get something. It's just not who I am anymore."

At Ellen's request, Kim recounted her experience on that horrible night in Paris last year. With a shaky voice and tears in her eyes, she told of how she felt, thinking those were her very last moments.
"I knew that was it for me," Kim said, then Ellen asked if that meant she was convinced she was going to die and Kim replied: "100%. I said a prayer, I'm like, I know I'm going to heaven. I hope my kids are OK... my husband..."

Watch the video below:


Kim also spoke about her former step father, Caitlyn Jenner’s memoir, “The Secrets of My Life. She does not approve of the way Caitlyn depicted her mother.
“My heart breaks for my mom,” “Because I feel like she’s been through so much.” She said she feels like Caitlyn is not being honest about “certain things” about Kris and other facts in the book and when she promotes the memoir. “I just feel like its unfair, things aren’t truthful.”