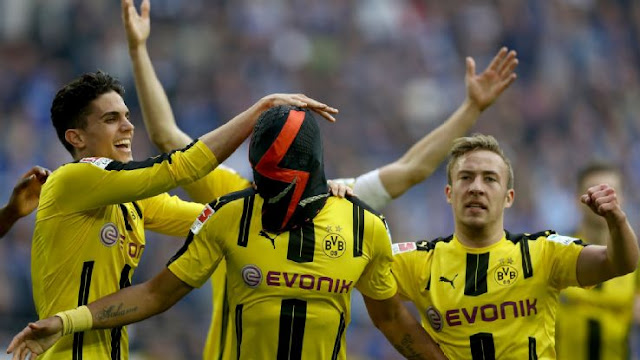 According to reports, Gabon’s Pierre-Emerick Aubameyang will pay a 50,000 euro fine for his latest masked escapade.


The striker has famously donned Spiderman and Batman masks in the past to celebrate goals, and he did so again this past weekend when he scored in Borussia Dortmund’s 1-1 draw with regional rivals Schalke in the Bundesliga.

However, he has fallen foul of his club because the mask he used against Schalke is the same as one he used in a marketing campaign for his sponsors Nike.

Rival sportswear company Puma are shareholders in Dortmund and have expressed their dissatisfaction with Aubameyang’s stunt, but left it up to the club to decide his punishment.

Bild reports that the player will be given a five-figure fine.

The Gabonese player has already been in trouble with the club’s bosses for shaving Nike’s famous ‘swoosh’ symbol into his hair last month.

"It's not on that we are forced in this way to push through the economic interests of Nike. Our partner is Puma," Dortmund's CEO Hans-Joachim Watzke told Bild.

"This act is unworthy of a large corporation. A serious (business) relationship is different to that.

"The relationship is currently significantly strained at the moment," he added, referring to the club's relations with Nike.
at 12:09 PM