Rihanna’s attempt to show love to Queen Elizabeth II has been met with serious backlash.
Over the weekend, the BBHMM singer took to her Instagram to share images of the Queen’s head photoshopped on  her barely-clothed photos. To some fans, these cheeky posts were a tribute to the Queen who turned 91 on April 21, but many Britons following the singer found the photoshopped images highly disrespectful, and they dragged her for this.
The first photo features the Queen in Rihanna’s all-green outfit, and the singer captioned it with the title of Kendrick Lamar’s hit track, “Be humble.”

The second photo shows the Queen in Rihanna’s red Yves Saint Laurent fur coat over low-riding denim shorts and black heels. She captioned it with a line from Mariah Carey’s song ‘It’s Like That’, saying, “Y’all chickens is ash and I’m lotion.”

The third one shows the Queen in a Diamante bodysuit which Rihanna wore to Coachella. Rihanna captioned the image: “cause u f*** like a grandma f***, u just an amateur. #gucci”. She later edited this, saying her mother didn’t like the caption.

#gucci UPDATE: Mumz said she won't too happy bout this post so I had to edit *insert appropriate Gucci Mane lyrics here*
A post shared by badgalriri (@badgalriri) on Apr 22, 2017 at 9:37am PDT

And the last photo – perhaps the most disrespectful one, shows the Queen’s face imposed on her recent Paper Magazine shot. The photo has Rihanna in an Ombre wig, with her breasts visibly displayed. “It’s not that deep,” said Rihanna of the photo. These images ticked off her fans, and some used that opportunity to mock the singer over her last performance in the UK which allegedly saw few fans in attendance. Others noted that the photoshopped images are simply disturbing.


“I’m not English or a Brit, but I find these series of photos disturbing. It’s like doing it with photos of my grandmother. These lack taste whatsoever,” said one fan. Another said, “It’s funny and everything, but be careful, the English are really sensitive!” 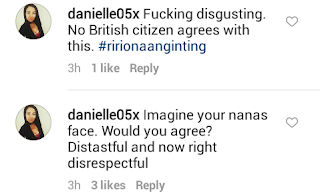