Last week, Serena Williams announced that she's 20 weeks pregnant on SnapChat shocking fans. However, she has since revealed that she uploaded the photo by accident. 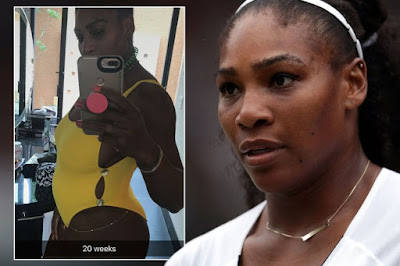 “I was just saving them [for myself]” she said. “I’ve been so good about it, but this was the one time it slipped.”

The 35-year-old was using the app to take weekly photos tracking her bump growth and quickly deleted the photo after posting – but it was too late. Her publicist was then forced to confirm the news.
Fans were amazed when they quickly worked out that Williams must have been pregnant during the Australian Open – which she won – in January. However, the world number one also went on to reveal that she only found out that she was pregnant two days before the tournament saying, “It wasn’t very easy”.
“You hear all these stories about people when they’re pregnant – they get sick, they get really tired, really stressed out.
“I had to really take all that energy and put it in a paper bag, so to say, and throw it away.
“Pregnant or not, no-one knew and I was supposed to win that tournament,” she explained. “Every time I play, I’m expected to win. If I don’t win, it’s actually much bigger news.”