Viola Davis gives a gripping toast at the TIME 100 gala

Actress Viola Davis is the rave of the moment. These past years have been some of the best for her, winning one award or the other. The most recent honor bestowed on her is being named one of the TIME 100 most influential people of 2017 and for the TIME 100 gala on Tuesday night, the award-winning actress had her audience enthralled as she gave what could be considered by most as one of the most powerful toasts this year. 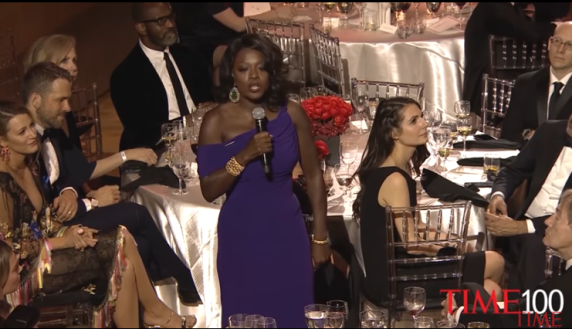 Viola told her audience of a time when she felt lost, wondering what she had to do to set herself apart from everyone else and to get insight, she took a trip to Gambia in Africa. She went on to regale her audience with the story of a ritual she witnessed in Gambia and how that gave her clarity. She concluded her toast with a quote from Thomas Martins and

"Perhaps we're stronger than we think," she said. "That everybody in this room, I'm sure at some point, has gone through something in their lives, and you survived it. But not only did you survive it, you took that trauma, and that hurt, that revelation, or whatever it was, and you used it to connect, to give, to influence, to help, and that is the beauty and the purpose of what we are here on this Earth to do."

She concluded by encouraging everyone present to use what they have and everything they've gone through to help others because that's the reason for being in this world.

"I lift the glass to everyone in this room, everyone who has decided to live a life bigger than yourself. Everyone who decided to slay those dragons and say, it's not just about me. And I applaud you. And I am honored to be in this room with you," she said in closing.
at 1:21 PM