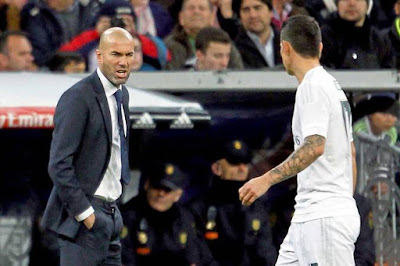 
The Colombia international started only his eighth La Liga game of the season but was brought off after 72 minutes.

And as he was walking off the pitch, television cameras picked up the 25-year-old’s angry comments towards the Madrid boss.

According to Deportes Cuatro, Rodriguez was captured on camera saying: “Motherf****r! You never give me a full game!” as he walked off the pitch.

Rodriguez then punched the dugout wall in frustration before sitting down on the bench.

After the match, Zidane admitted he understood Rodriguez’s frustrations but insists the decision to substitute him is nothing personal against the midfielder.
.
He said: “I have not spoken with him, it is normal that a player wants to play the full 90 minutes,

“These are things that happen and that’s it. He played well and I am pleased with that.”
at 5:06 PM