Brad Pitt reunites with his children, eldest son refuses to show up for the reunion 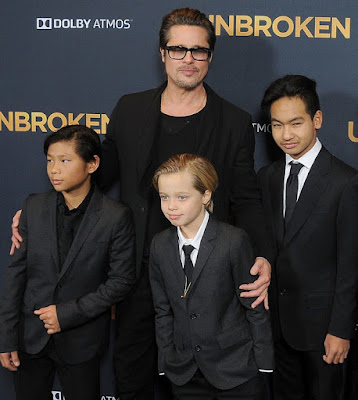 For 19 long days, Brad Pitt patiently waited to be reunited with his six children. He stood by as Maddox, 15, Pax, 12, Zahara, 11, Shiloh, 10, and 8-year-old twins Knox and Vivienne underwent counseling to help them prep for the visit.


As a Pitt insider explains in the new issue of Us Weekly, “He wanted to make sure the meeting would be the most productive for the kids.”

But when the group finally gathered October 8 at one of the L.A.-area homes Pitt, 52, once shared with estranged wife Angelina Jolie, the result was awkward, at best. With Maddox refusing to attend — “He chose not to go and stayed with Angie,” says a Jolie confidante — and a therapist monitoring close by, the get-together was anything but a picture-perfect, hug-filled homecoming. Says a source, “It wasn’t full of joy and happiness.”

Determined to do everything by the book, Pitt waited nearly a month to set up a meeting with his children after Jolie, 41, blindsided him by filing for divorce and requesting full physical custody of the kids September 19. Per the voluntary agreement he and Jolie signed off on in late September based on recommendations from the L.A. County Department of Children and Family Services — all six of the kids had to undergo sessions with a therapist before the visit.

“He and Angie agreed on steps that needed to be completed,” says a source. “He wanted to wait until the timing was best.”

But for all his efforts, the War Machine star couldn’t make the visit run smoothly. “It was emotional for him,” says a source. Maddox’s snub wasn’t taken lightly. A Jolie source says the teen, who argued with Pitt during a September 14 flight on a private jet, was effectively choosing sides. (Because he’s older than 14, by California law he can decide which parent he’d prefer to live with.)

Adopted by Jolie in 2002, two years before she fell for Pitt, “Maddox is very close with Angie,” explains the source. Jolie insiders deny Maddox has made up his mind about custody — however, one source does say that if Jolie is done with Pitt, Maddox is too. “He doesn’t really see himself as Brad’s son,” a source says of the Cambodia native, legally adopted by Pitt in 2006. Another Jolie source is more blunt: “Maddox never wants to see Brad again.”

Pitt isn’t even sure when he’ll get the chance to try. While the parenting agreement, in place until October 20, gives the exes shared legal custody, Jolie continues to have sole physical custody. A Jolie insider says the actress “is not trying to poison the kids against Brad.… She wants them to have a relationship with him once their health and safety is assured.” But, says a source, “no other visitations have been scheduled.”