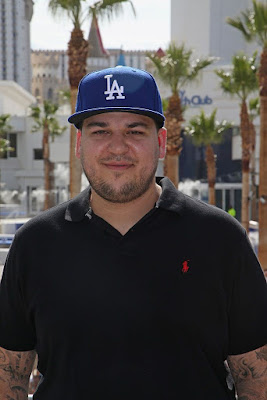 Rob Kardashian can’t seem to catch a break. Just one day after welcoming his first baby, daughter Dream, into the world, he’s catching backlash on social media for his upcoming line of kids’ designs for his sock line, Arthur George.


The socks are meant to be cheeky, but a lot of people are not seeing the humor in it.

Channeling the marketing prowess of his famous family, Kardashian posted a sneak peek of the mini socks to Instagram yesterday to coincide with the birth his daughter with fiancé Blac Chyna. The post showed a pair of small feet sporting socks that read “Thug Life.” Kardashian wrote, “@arthurgeorge87 kids and baby socks, coming 2017!! You know our baby girl is going to be rocking these!!” Though the child’s face can’t be seen, he appears to be a person of color.


Plenty of people did not appreciate the message those socks were sending though — especially on a little one — and they piped up in the comments. “Why would you put thug life on socks for kids?? I would never put these on my kids, totally sending the wrong message @robkardashian,” one person wrote. “Not cute or creative and not appreciated or appropriate to put thug life socks on a child of color. #wrongmessagebro how about – Future Prez,” another said. “Please throw away this logo every black person is not a thug and you never lived the life please and thanks,” another chimed in, while a fourth dug in deeper, writing, “This is disgusting. You don’t know what struggle is, and you are appropriating a culture you will never be a part of. You should quit with this anti-black sentiment.”

Seemingly unfazed, Kardashian posted another promotion of the socks, this time on a white child and emblazoned with the phrase “Little Homie.” This pair didn’t get quite the same negative reaction. In fact, the most flak the 29-year-old got pertained to not including non-slip grips on his designs. “Hope they’ll have the rubber on the bottom! To avoid falls!,” one person wrote, echoing the concern of others.


Meanwhile, the negativity on Kardashian’s first post surged, and ultimately turned into a debate with fans who defended the design and the phrase “thug life.” One commenter wrote, “Thug life means opposite of someone having all he needs to succeed. Thug life is when you have nothing, and succeed, when you have overcome all obstacles to reach your aim. Word Evolved by the late Tupac Shakur. Commonly mistaken for a Criminal.”

“Thug Life: Volume 1” was the name of an album released in 1994 by the late Tupac Shakur. The phrase is commonly believed to have been coined by Shakur.

Others felt that commenters were simply being too sensitive, feeling the socks were cute and harmless. One person wrote, “Lighten up people! My son says it and has no idea what he’s talking about! I need to get him a pair! I didn’t know socks made someone a thug!”. Another put the onus on parents to decide what message to send their kids: “So if you don’t want your child to wear thug life socks then don’t buy it.”

The Kardashians are no strangers to controversy though. In fact, it seems to forward their brands. You know the famous phrase: any publicity is good publicity.