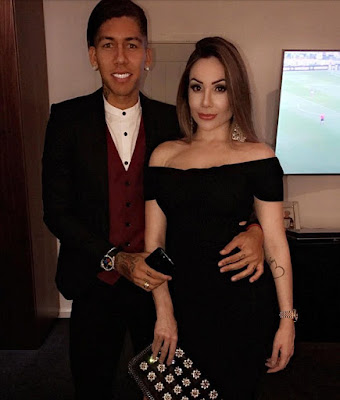 Roberto Firmino and his wife enjoyed some quality time together as the Liverpool forward took advantage of a night off.


The Brazil international was handed a rest by manager Jurgen Klopp as the Reds reached the EFL Cup semi-finals with victory over Leeds at Anfield.

Firmino looked smart alongside his wife Larissa Pereira as the two posed for a picture shared via Instagram in their home before heading out.

The Liverpool playmaker's wife appeared allude to Tuesday morning's Chapecoense plane tragedy in the caption on the post.

Players and staff from the club playing in Firmino's native Brazil were travelling to a game against Atletico Nacional in the Copa Sudamericana on Tuesday when it crashed, killing 71 of those on the flight. The game was to be Chapecoense's first ever final in the competition.

'Ah these trips! With each trip an anguish, while they do not arrive the heart does not calm down,' she said.
at 3:44 PM