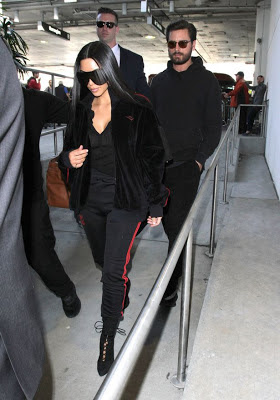 Kim Kardashian has jetted to Dubai with Scott Disick. The reality star shocked the world as she made her return to social media last week, and now she is making her first trip overseas since she was robbed at gunpoint in Paris back in October.


Proving she's well on the mend following the horrifying ordeal, Kim, dressed in a black tracksuit and oversized sunglasses, was seen making her way through LAX with Scott and four security guards.

She was also sporting a ring on her lower lip and wore her dark hair poker straight.

Alongside a picture of the pair of them, she tweeted: "On our way #Dubai."

According to TMZ, the star is making up for a trip to promote a makeup tutorial with makeup artist Mario Dedivanovic which was originally scheduled for October 14 - 11 days after the robbery.
at 1:25 PM