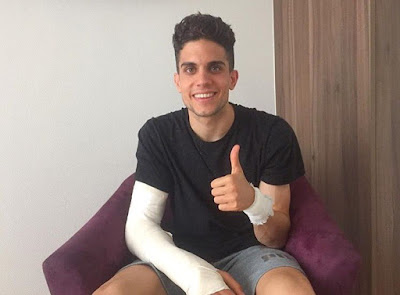 Borrusia Dortmund defender Marc Bartra has undergone successful surgery after he got injured in the aftermath of an explosion in Dortmund, Germany on Tuesday.


The team were on their way to their Signa Iduna Park ground for the UEFA Champions League fixture with Monaco when an explosion happened near their bus, shattering windows and injuring Bartra in the hand.

The match was postponed to Wednesday evening and Bartra underwent surgery.

"Hello! As you can see I am doing much better. Thanks for all your messages! All my strength to my team mates, fans and to @BVB for tonight!" the former Barcelona star wrote on Twitter after displaying a picture of his heavily wrapped right hand on Instagram.
at 5:59 PM